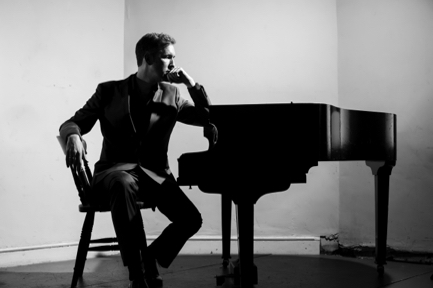 Michael Roulston is a performer and composer. A recent feature article in the U.S. publication Cabaret Scenes said “Roulston’s creative output spans mainstream and alternative genres, and shapes artistic endeavours all over the capital. His work ethic can only be described as heroic… As his reputation grows, and his influence spreads, cabaret devotees can feel reassured that London cabaret is in safe, adventurous hands. Musical Theatre Review said ‘Roulston is an accomplished and versatile musical director and composer who appears to be constantly working in the West End and beyond. A regular face behind the piano at practically every major cabaret venue in London’.

Michael has won two Spirit of the Fringe Awards for Edinburgh Festival performances in 2016 and ’17. With co-writer Sarah-Louise Young he won the London Cabaret Award for Best Musical Variety Act, the Three Weeks Editors’ Award, The Stage Edinburgh Award and an Argus Angel Award; ‘Outstanding cabaret ★★★★★’ TimeOut, ʻA force to be reckoned with ★★★★★’ Three Weeks. With lyricist Dusty Limits, he was a TimeOut & Soho Theatre Cabaret Award finalist and nominated for a Melbourne Green Room Award 2018 for Original Songwriting.

He is highly in-demand having collaborated many major performers including the world class Fascinating Aida (Southbank 2019, Uk Tour), Dillie Keane (UK tours, Brits Off Broadway 2016, Adelaide Cabaret Festival, Galle Literary Festival, Sri Lanka), Meow Meow (BBC1’s John Bishop Show, UK tour) and with Dusty Limits who TimeOut described as ‘The trailblazer’ and a review in The Scotsman for their show Postmortem simply said ‘Do. Not. Miss. This’.

His highly successful collaboration ‘Julie, Madly, Deeply’ about Julie Andrews which has played a West End run, a UK tour, Australia, Canada and an Off Broadway run in 2019. The show has garnered exceptional praise including: ‘…apart from his technical skills as an arranger and performer, Roulston is a chameleon of the keyboard who adjusts his style effortlessly to the needs of his singing partners. I have seen him now perform live with three or four different vocalists, one would assume there was a separate pianist on each occasion…. He unveils a fully orchestral palette of sound and those tight, biting, rhythmic anticipations that even in the sweetest and slightest songs set a high technical bar ★★★★★’ British Theatre Guide.

The double act ‘Roulston & Young’ has played the prestigious Adelaide Cabaret Festival and received these comments: ‘…their easy chemistry, clever music, witty lyrics, relentless charm and their ability to entertain is a sheer joy to behold. These two are at the top of their game. See them if you can, in any show they offer. They are simply London’s comedic musical cabaret at its best’ Cabaret Scenes. ‘The piano leaps, hops, simpers and croons under Michael Roulston’s enthusiastic direction… entertainment at it’s most dazzling… heart-warming, comforting and immensely uplifting’ The Upcoming.

He has performed with “Christine Bovill’s Piaf” in the UK and Europe and the act been endorsed by Charles Du Monde, writer of “Je Ne Regrette Rien”. ‘The entire audience was on its feet, shouting, whistling, stamping its feet and smiling… Grown men wept. ★★★★★’ Edinburghfestival.org.

He co-created The Entire History of Cabaret (Edfringe & UK tour) with Shoo Shoo Baby. The Scotsman newspaper said he is “…not just a fine pianist but also the possessor of golden tonsils” of his singing voice.

Dusty Limits’ 2015 album ‘Grin’ and 2018’s ‘Life & I’ which he composed, arranged and co-produced gained superlative press, including: ‘Roulston grasps the breadth and depth of the eloquent text, intelligent subtext, and biting social commentary of Limits’ lyrics, his music serving as creative amplification, bringing the energy of a live performance into the studio recording with layered textures of sound’. Cabaret Scenes.

Lili La Scala’s 2015 album Siren which he produced, arranged and wrote some songs for, has also had high praise: ‘When you listen you’re hypnotised straight away, no matter how much you may wish to stop listening, you can’t… This album sends shivers down my spine. I have been completely swept away’ Kettlemag.co.uk

His songs can be heard in venues such as Cafe De Paris, Soho Theatre, The London Spiegeltent, Double RR Club, The Famous Spiegel Tent, The Hippodrome, The Savoy, The Other Palace, The Pheasantry, The Crazy Coqs, The Vaults and various New York and Australian venues.